Ray Charles - Understanding (1968) This song only reached #46 in 1968, but it was a big enough hit to inspire the odd-ball takeoff recorded by The Red Shadow. It contains the unfortunate little snippet:

My old lady also understands that a man must have respect
What I mean is, if she must play around don't let me catch her,
because what I don't see can't hurt me, you
understand?

But on the other hand, If I should ever
catch her I'm not gonna talk about-a
and call her a bunch of bad names like you all might
No no mh
What I'm gonna do, I'm gonna go down-town to the
Hardware store and buy myself a double blade ax,
Come back, square off, and believe her soul's gonna
Belong to the good lord
Because her head's gonna belong to me, and I
Guarantee she'll know what I mean when I'll say... Red Shadow was an odd outfit performing polemical rock and roll from the mid-1970s. The core of the group was three ideologically minded economists who met at the University of Michigan in the early 1970s. They decided to form a band to preach the urgent message of left-wing economics.

Red Shadow put out two albums, Live at the Panacea Hilton (1975) and Better Red (1978) [Ed: WHICH I JUST BOUGHT FOR YOU!!]. Red Shadow’s song “Gone Gone Gone” is a parody of the Beach Boys’ “Fun Fun Fun” in which the malign corporate overlords will be “gone gone gone when the workers take their power away.” Similarly, “Anything Good” reworks Chuck Berry’s “Johnny B. Goode” to accommodate the following lyric:

They may know how to serve the ruling corporate brass
But they’ll never have the knowledge of the working class
No no, no they don’t know know know
Anything good

Sammy Davis Jr. - The People Tree (1972) Written by Anthony Newley and Leslie Bricusse, who also wrote Sammy's only #1 hit, "The Candy Man". That song was from the soundtrack to the movie Willy Wonka & the Chocolate Factory. "The People Tree" was, in fact, the follow-up single, and it sank without a trace.

Gordon Parks - Blowin’ Your Mind (1972) With vocals by O. C. Smith, whose big hit was "Little Green Apples". Talk about trying to make lightning strike twice (see "The People Tree")! O. C. Smith had been recording since the mid-'50s, starting out as Ocie Smith. An excellent stylist. I could and should do a whole show about him. The Beach Bums (alias for Doug Brown and the Omens) - The Ballad of the Yellow Beret (1966) With Bob Seger(!) on vocals. Look at the composer.  From AllMusic: Despite a meager recorded output, Doug Brown and the Omens continue to hold a key place in Detroit rock and roll history as a launching pad for the young Bob Seger. Brown was already fronting the Omens when he first met Seger in 1964, soon inviting the aspiring singer/songwriter to join the band; financed by Del Shannon, sometime around 1965 the group cut a single, "TGIF"/"First Girl," which represents Seger's first known official recording. In January 1966, Brown produced Seger's regional solo blockbuster "East Side Story," the record credited with making the singer a Detroit superstar; the following summer, he also helmed Seger's "Heavy Music," another local smash.

Which doesn't excuse this particularly tone-deaf single. I guess no one thought their darker moments would be around in 2021. The Utica Club Natural Carbonation Beer Drinking Song (1968) The band playing on this is the Chicago-based The Trolls. Richard Berry - Doin’ It (1973) Richard Berry wrote and recorded the original 'Louie, Louie,' later performed by The Kingsmen. It is the second most-covered song in the history of rock music.

Be Thankful For What You Got (inst.) - William DeVaughn (1974) From Wikipedia:

DeVaughn was a salaried government employee as a drafting technician and a part-time singer. He wrote a song called "A Cadillac Don't Come Easy", which was eventually re-written to become "Be Thankful for What You Got", in 1972. He spent $900 towards getting it recorded with Omega Sound, a Philadelphia production house. The record producer at Omega, John Davis (a member of the MFSB studio session group), came up with a smooth arrangement, eventually booking time to record at Sigma Sound Studios in Philadelphia, used by Philadelphia International Records.

The song was released on Roxbury Records, a subsidiary of Chelsea Records, run by industry veteran Wes Farrell. You know him from his work with The Partridge Family.

The record sold nearly two million copies on its release in spring 1974, reaching No. 1 on the US Billboard R&B chart and No. 4 on the Billboard Hot 100. With a sound and content influenced by Curtis Mayfield, its simple and encouraging lyrics hit home, to the extent that it became featured on gospel radio stations. When his success as a recording artist seemed guaranteed, DeVaughn quit his government job.

DeVaughn released an album, mainly of songs with a religious character, and its second single, "Blood Is Thicker than Water", reached No. 10 R&B and No. 43 pop later in 1974; "Give the Little Man a Great Big Hand" had only minor R&B chart success early the following year. Live, DeVaughn preached to and admonished his audience from the stage [Ed: Just like George Harrison!]. He lost interest in the music industry not long afterward, working in a record store and again as a draftsman. 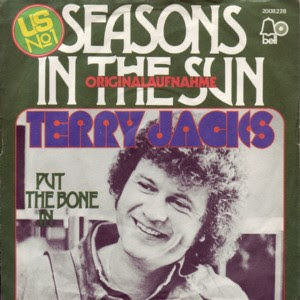 Lee Edwards (The Christian Con Man) - Maui Girl (1983) From one of the biggest inspirations for this show, for better or worse, 365 Days Project: "The Christian Con Man Goes Hawaiian" is like a three-wheeled Radio Flyer rolling down a rocky hill. It starts slow but careens out of control by the journey's end. The track "Maui Girl" appears at the point when Lee Edwards is really picking up momentum (or another glass of cheap whiskey). "KIMCHEE LOVIN'!! I SHOOK HER COCONUTS!"

UK - In The Dead of Night (1979) This is the almost never-heard single recorded with Terry Bozzio on drums, instead of the original with the also-great Bill Bruford.

The Four Tops - So Deep Within You (1973) Odd to hear The Four Tops cover The Moody Blues. This has to be Justin Heyward on lead guitar. HAS to be.

IS. Here is an article.

Fanny - Conversation With a Cop (1970) From Discogs: Fanny was an American rock band, active in the early 1970s. They were one of the first all-female rock groups to achieve critical and commercial success, including two Billboard Hot 100 top 40 singles.

The group was founded by guitarist June Millington and her sister, bassist Jean, who had been playing music together since they moved from the Philippines to California in the early 1960s. After playing in several bands, they attracted the interest of producer Richard Perry who signed them to Reprise Records in 1969 as Fanny. The band recorded four albums together before June Millington quit the group. Following a final album, Fanny disbanded in 1975.

Jackie Lynton - The Ballad Of Hank McCain  (1969) From the soundtrack to "Gli Intoccabili" (aka "Machine Gun McCain"); Written by Ennio Morricone. Fricking GREAT.