Godley and Creme, and Some Obscure Original Versions

Albert Finney - Those Other Men (1977) On the Motown label. Hard times had befallen this American institution. I remember him singing this on the Mike Douglas Show. He explained the lyric, and the crowd applauded.

Bill Haley - God Bless Rock and Roll (1980) From the Producer, Kenny Denton's book about his life in music:

In March 1979 I received a phone call from Sonet Records, asking if I would like to produce 3 or 4 tracks with their artist Bill Haley. Although Bill had not sold in large volume for many years, I jumped at the opportunity to work with a Legend. I was asked to contact Bill’s manager, Mr. Patrick Maylnn. This would turn out to be a very short conversation filled with unease, as he told me there was no way I would be producing his artist Haley! This was a job for his assistant Dave Davis who doubled as Bill’s road manager, and that Bill had insisted that Davis should produce any recordings he was going to make. I contacted the record company to inform them of my conversation with Mr. Malynn; their reaction was that unless I produced the recordings for them, no sessions would take place.

A few days later I had the most charming call from Mr. Maylnn saying, ‘That if the record company had so much faith in me, they had decided to give me their blessing to produce the recordings”. Patrick also suggested that I should contact his assistant Dave Davis, as he Knew Bill so well, he would be in a position to give me a few helpful pointers. I welcomed any input that would make the sessions go smoothly, so I phoned Davis to obtain any useful suggestions that he may be able to pass on to me about Bill. Davis told me  “Its very important to make sure he is in a vocal booth separated from the band, he’s a very moody type of guy, and the slightest thing could upset him, never call him Bill, only Mr. Haley”. Davis went on to tell me various other nuances about Bill that I may encounter. I was beginning to think maybe I should have left the productions to someone that knew Mr. Haley a bit better than myself.

Charro - Love Will Keep Us Together (1977) For people of a certain age, Charro was a talk show/variety show mainstay. Sexual without being sexual. Talented without record sales. She played a mean flamenco guitar! But she was also a willing parody of herself. "I wanna change my image! i really wanna show people I can R O C K!! Gimme that guitar. Now find me the best producer you can get. Brian Wilson! What? He's trying to get his brothers to get him hamburgers? Ok. What about Mike Love? No? Ok....Bruce Johnson. HOW MUCH are the extras on the cover costing me?? Just...get the janitor's family..." Yes, "I Write The Songs" is on the album. And "Darlin'" was a Beach Boys single from the late '60s. Not as bad as his brother's Todd Rundgren-produced desperation from 1980.

Dennis Wilson - River Song (1977) The album "Pacific Ocean Blue" was the best post-1973 recording by any Beach Boy bar none, including the band itself.

Gentle Giant - Freedom’s Child (1970) Folky, nice demo, sort of a POC for the prog leanings that would flourish and flounder later in the decade. I like all the stuff they did during these unreleased demo recordings, but I don't really dig their first album.

If it wasn't for Gary Storm of WIZR 107.7 in Buffalo, I never would have heard about these guys, but for a good two years, I was obsessed. The things they did with harmonies, writing lyrics, and wild sound experiments that I had never heard before amazed me. Especially "Random Brain Wave/I Pity Inanimate Objects". They were in 10CC and I tried for a good long time to like 10CC, but it just never took as it did with these guys. It didn't surprise me that they ruled MTV's early days. Their imaginations ran wild and in the video realm and its nascent possibilities, they were champions. Godley and Creme - Gizmo Demonstration Record (1975) Godley and Creme quit 10CC (they should have just taken a break, but who can reason with wealthy stoners?) to develop and record with a kind of E-bow for all six strings of the electric guitar. Little teeth rubbing against the strings to create a fine sound, when it worked. From Kevin Godley's website:

In 1977 Lol Creme and I released a triple album box set called CONSEQUENCES to explore the potential of a device we’d invented years earlier called the GIZMO. It was a mechanical unit that straddled the bridge of an electric guitar and bowed the strings to simulate violin, viola, cello, and contrabass. Unfortunately, the technology and physical materials of the day weren't resilient enough to engineer a reliable product and the GIZMOTRON, as it was dubbed when brought to market in 1979, quickly faded from view (as did the album). Oh, it surfaced occasionally over the years, on the odd track by some big names, sonic experimentalists, and fans of arcane guitar effects but, at the time, it was a double whammy kick in the balls for us, so we reluctantly let it go - we had to. The GIZMO represented an extensive period of intense work and faith with negligible critical or commercial rewards, so we moved on, let the patents expire, and closed the door on that chapter of our lives. 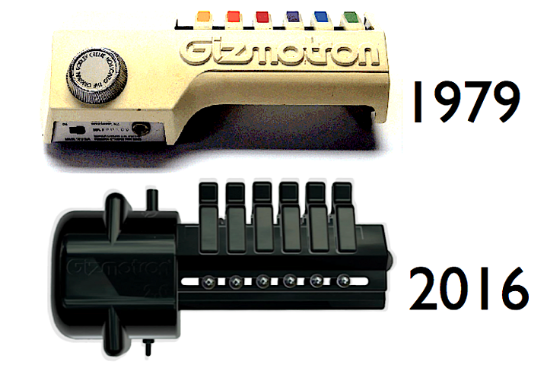 Like The Beach Boys, Godley and Creme have apologists who can mine and cheer for little nuggets from sonic abortions like Ism Ism, Birds of Prey, and Goodbye Blue Sky, but trust me. Stay with their first three albums. They released an album called The History Mix (Vol. 1) which was produced by Trevor Horn and featured two side-long, occasionally clever dance-mixes (?) chock full of G&C/10CC snippets recontextualized. But as big a fan as I was, no group I know regurgitated their own mythology as much as these guys. Their first three records, though, are seminal.

Lou Johnson - Always Something There To Remind Me (1964)