The Beach Boys - Seasons In The Sun (1971) Originally titled "Le Moribund" ("The Dying Person"), it was a huge hit for Terry Jacks in 1973, who had previously been part of a husband-wife band called The Poppy Family. The Poppy Family had a sitar player in the band. Four people. One was a sitar player. ANYHOO, Jacks tried repeating his luck by recording another Brel song, "Ne Me Quitte Pas", as "If You Go Away", but as the French say, "La foudre ne frappe jamais deux fois."

Wikipedia: The first version of the song was recorded by Jacques Brel, who also wrote it in a brothel in Tangiers. Sung in a marching tempo, it tells of a man dying of a broken heart and shows him saying his last farewells to his close friend Emile, a priest friend, an acquaintance named Antoine, and his wife who has cheated on him numerous times with Antoine. Despite knowing of Antoine being his wife's lover, he wishes no ill upon him but tells him to take care of his wife. The American poet Rod McKuen translated the lyrics to English. In 1964, the Kingston Trio first recorded an English version of "Seasons in the Sun", which was later heard by Terry Jacks and became the basis for his rendition.

Jacks rewrote the lyrics, although he is uncredited for it. He justifies the rewriting by stating that he deemed the original version and its translations to be "too macabre". The inspiration for the rewritten lyrics was a close friend of his who was suffering from acute leukemia and died four months later. The Terry Jacks rendition, which was later dedicated to the friend, has the dying man giving his last words to his loved ones with whom he shared his life, much like the original. However, unlike the Jacques Brel version, the man does not die broken-hearted but instead, acknowledges the rights and wrongs of his actions in life as he passes away peacefully.

In the rewritten version, the man first addresses his close friend, whom he had known since childhood, and reminisces the happy times they had such as playing and studying together ("climbed hills and trees", "learned of love and ABC's"), and friendships with others ("skinned our hearts and skinned our knees"). He then addresses his father, who tried to give him a good upbringing and exert a positive influence on his undisciplined life ("I was the black sheep of the family", "You tried to teach me right from wrong", "wonder how I got along") which included overindulgence, vices, and revelry ("too much wine and too much song"). The man finally addresses "Michelle", possibly his daughter or niece, and stating how she lifted his spirit up in times of despair. Before he dies in peace, the man reminds all three that he will always be alive in their hearts and will be present in spirit when they see people or visit places; pretty girls (old and new friends) for the close friend, young children playing for the father, and flower fields for Michelle.

This version is actually produced for The Beach Boys BY Jacks. He produced this one song and they gave him the heave-ho. Maybe he said, "I'll produce, but there's this song I wrote called 'Put The Bone In' which you might like." The ticket back to Vancouver was on its way. 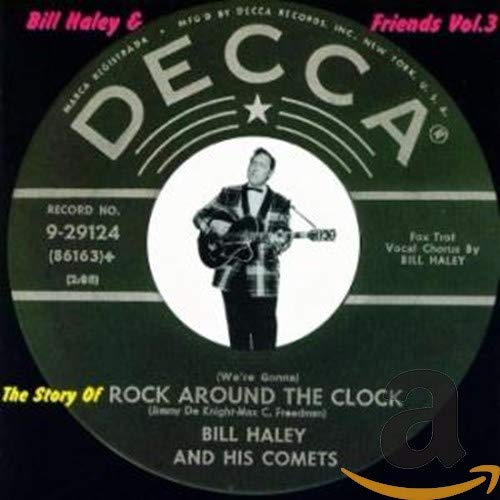 Bill Haley and His Comets - Rock Around The Clock (1974) Live from the Hammersmith Palais in London.

Bill Haley and His Comets - Rock Around The Clock (1979) Amsterdam, Netherlands. Notable as having Chico Ryan from Sha Na Na on rhythm guitar. To me, I guess.

Bill Haley - Rock Around The Clock (1968 vocals, accompaniment overdubbed horribly by a bunch of anonymous guys.)

Bill Haley and His Comets - Rock Around The Clock (1968) Philips Studio, Stockholm, Sweden, before an audience invited to a session by Sonnet Records. Freddy Cannon - Red Valley (1971) Featuring Wadsworth Mansion, which had a catchy as hell hit the previous year with "Sweet Mary". One album and zap. From the back cover: "Music today is so open to style and expression that we enjoy the challenge of always presenting a wide variety of songs to reach as many people as possible. They have been entertaining alternately between the Montauk Golf & Racquet Club and Gurney's Inn for the past three years. Off-season, Bill and Lisa perform on cruise ships, including trips to the South Pacific and the Orient."

Kool and the Gang - Raw Hamburger (1969) Formed by Robert "Kool" Bell, his brother Ronald Bell and a bunch of their New Jersey teenage friends in the mid-60s (then called the Jazziacs), Kool & the Gang played traditional jazz in regional venues for several years, slowly morphing their style to incorporate emerging funk sounds of Sly and the Family Stone and James Brown. They were signed by the De-Lite label in the early '70s and gathered a small but loyal national following (in particular for their 1971 release Live at the Sex Machine). The group's fortunes exploded in 1974 with Wild and Peaceful, an infectiously raw album that spawned three smash hits, "Funky Stuff," "Hollywood Swinging," and "Jungle Boogie," all featuring great instrumentation and lyrics virtually shouted by the group. However, as quickly as they rode to fame, Kool & the Gang faded, their rough sound appearing out of place against the slick, dance-oriented sounds that began to dominate popular radio in the late '70s. And then they broke up, never to be heard from again.